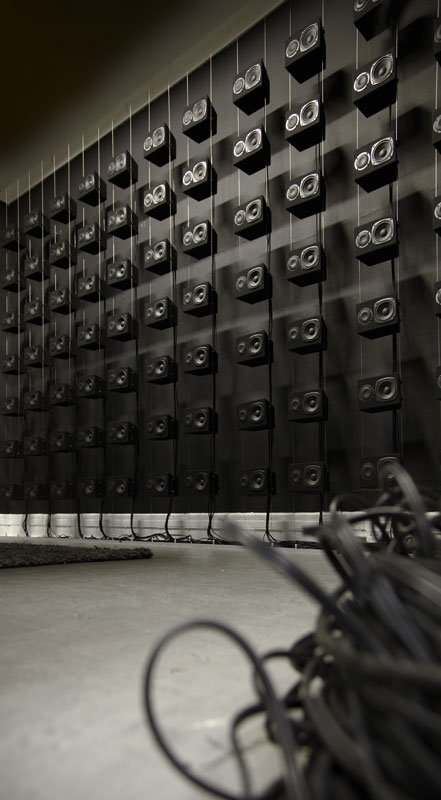 So today I was very excited because I got the chance to play around with Lotto Lab’s Soundwall – a mammouth interactive speaker array, currently housed at the Science Museum in London.

The wall features a total of 77 speakers and is controlled via the use of a handy touch screen interface. The interface allows the user to essentially bounce sound from three mono tracks (or up to 8 analogue inputs) across the wall in realtime, much to the delight, or perhaps annoyance of everyone in hearing distance.

The simple touch screen interface includes volume faders for each of the three tracks, which are subsequently represented by one of three coloured balls. These coloured balls essentially represent where the sound is localised on the speaker wall; so as the user moves the balls across the screen the sound on the wall pans accordingly. This allows the user to throw sound across the wall in all directions, just imagine a ball of sound bouncing about inside your head and you’re almost there… It’s certainly very cool to play with.

So I tried out a collection of ‘racket’ themed samples which I have prepared for use during next weeks Science Museum Lates:

… and here’s a clip of me standing infront of the wall as David Robertson throws the sound all over the place, you can hear an interview with David in the next episode of Tomorrow’s Tentacles:

Although the wall’s functionality is pretty limited at the moment, it will be interesting to see how its use is expanded. It could certainly do with a few more features, perhaps expanding on the user interface to include a selection of tracks or the addition of effects which could be controlled via the touch screen. Its use as a performance tool is certainly very attractive and I’d love to experiment with it further! – Watch this space.